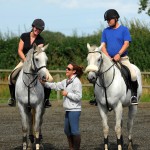 Did you know about the other equestrian coaching qualification which is recognised and accredited throughout the UK?

Many are unaware that UKCC are nationally recognised coaching qualifications – outside the BHS system.

The Government introduced a UK Coaching Certificate through ‘1st for Sport’ via The British Equestrian Federation (BEF).  This coaching certificate has created universally accepted standard levels of coaching ability across all disciplines in the equestrian world.

The British Equestrian Federation (BEF) member bodies, work closely together to co-ordinate policy on a wide range of issues such as equestrian facilities, coaching and volunteering.

BEF members include the following, all of whom offer UK Coaching Certificate qualifications:

The Association of British Riding Schools now has an increasing, bona fide list of UKCC Coaches with Government qualifications.

The ‘UK Coaching Certificate’ is nationally recognised throughout the UK as an accredited qualification in coaching in a variety of sports from Abseiling to Vaulting.  UKCC’s do not qualify you in equine management & equestrian coaching alone, but are part of an overall programme of progressive learning and final qualifications provided by BEF members.

We would suggest that prospective equestrian coaches gain experience, and recognised certificated, practical based programmes to gain and have proof of their knowledge in horse care and management. It is suggested they do this by achieving accredited equine qualifications. e.g. Pony Club tests, ABRS tests, BHS Grooms pathway  or WBD (Work based Diplomas) /City & Guilds  / SVQ / qualifications in horse care.

To find out how to gain a coaching / teaching qualification contact the ABRS head office to find out about the nearest centre to you which offers ABRS help with ‘training for UKCC Level 1 & 2’.  Some yards have coaches who train people for those qualifications and some do not – you may need to travel to find good training (it is your career, so it will be worth traveling time for this short training period to get qualified)

It need not be a ‘training’ yard, the coach / instructor training you.  Your trainer however needs to be aware of how you need to apply your work to become familiar with the professional assessments and of modern equine methods. They could well be your friend down the road who owns a yard and may have qualified some years ago.  You should be aware however, that the person you are looking to for help salso need to be fully au fait with the qualifications you are aiming for and have access to the relevant modern training resources and, if they are up to speed, will have the current syllabus in their head and in their possession and will therefore be aware of what the assessors will be looking for at each stage.

If on the other hand, you need to gain more general practical experience for either the ABRS or BHS, that friend might be an excellent first stepping stone for gaining more practical skills until you are ready to move on to the more ‘assessment aware’ coach.

If you are not currently training from scratch for a UKCC with an ABRS yard/riding school , the previously mentioned City & Guilds etc., qualifications are OFQUAL accredited, with mainly practical based training. Equally useful are the Pony Club more advanced texts. These qualifications are available for young people via the Pony Club, and for adults via some colleges and other education providers.  The courses, tests & qualifications will provide you with – and more importantly, assess your practical & theoretical grounding – in care, management and safety according to welfare guidelines in UK.

If training from scratch with the ABRS you will of course gain those skills during your training at the ABRS riding school/centre.  This will ensure the coaching practices you develop through whichever pathway y9u take, are as safe as they can be, and the safety and welfare  aspect is especially vital in looking after the welfare of the horse as well as the participant.

The Government has introduced a UK Coaching Certificate ‘1st for Sport’ via The British Equestrian Federation.  This coaching certificate has created universally accepted standard levels of coaching ability across all disciplines. The ABRS now has an increasing, bona fide list of UKCC Coaches with Government qualifications.

Gaining a UKCC qualification at Level 2 usually contains a course with a taught element (mandatory in Scotland for funding) both in the classroom and practically alongside of the development of a coach portfolio based on clients you are coaching. There is a final assessment during which you are required to coach elements from the technical syllabus at each level.   It also requires the submission of a portfolio.

It does not assess knowledge or expertise in relation to horse care and welfare albeit demonstration of an knowledge & appreciation of equine health and welfare is necessary as a requirement to register for these qualifications either demonstrated through experience or previous qualifications (e.g. BHS Stage 1, Pony Club B Test).

These qualifications also have discipline specific pathways which very much focus on the skills and technical requirements for a competition coach within that specific discipline (from grassroots to higher levels of competition) and so you can easily specialise.

Level l  is generic and not discipline specific

Level 4  British Equestrian Federation with the University of Gloucestershire

What is the BHS

It has many aspects, among them are:  1. A public company which provides training for horse riders and more especially for professional qualifications via Riding Schools. 2. Owners of EQL the Awarding Body for BHS qualifications.   3. A membership body for riding schools which maintains standards of welfare and facilities amongst it’s members.   4. A membership body for riders and horse owners.    5. The BHS hold a register of BHS qualification holders and accredited coaches within the BHS system.   6. It also has a charitable arm with voluntary welfare officers around the country which provide assistance where possible.

For many years, the BEF and its member bodies have been running a coaching pathway in line with the UK Coaching Certificate (UKCC). The UKCC is an endorsement, provided by UK Coaching, of a sport’s own externally awarded qualifications used to ensure the levels and standards of coaches across sports conform to common levels.  In equestrian sport we have worked hard to develop our qualifications across the different disciplines and have significantly invested in revamping these qualifications in 2017 to meet the needs of our sport.

What actually is accreditation?

These are all generic terms.  In other words they are widely used by many organisations and companies to cover learning systems or programmes.  Each organisation tends to use it’s own terms and to differentiate one should include the organisation which awarded it.

The Level, Grade & Stages term:   Simply describe a grading system or a standard of learning where a student learns and may also be assessed at lower grades and gradually moves on to the next grade or level when ready – similar to school really.  They are simply names for the standards of learning.

Each organisation/company/training provider/college etc tends to use it’s own terms and to differentiate between them one should include the organisation which awarded it. Many use the same term.

What is a BTEC?

BTEC stands for British Technology Education Council (BTEC) and is a vocational qualification formerly offered under the National Qualification Framework (NQF) – awarding body is Pearson Qualifications.   Though they have mostly been replaced with Awards, Certificates & Diplomas, many of the new qualifications retain the well-known BTEC acronym in their name.   Offered by some colleges.

What is City & Guilds?

City & Guilds is one of the biggest and best-known awarding bodies in the UK, operating across a number of different sectors.  Their qualifications are delivered by over 10,000 training providers and include RQF Awards, Certificates and Diplomas, as well as SVQs, Functional Skills, Apprenticeships and other vocational programmes.  Offered by some colleges.  Often just called National Certificate or National Diploma (but without City & Guilds specified) are confused with many others available with similar names.

A National Diploma therefore is a vocational programme that focuses on practical study and plenty of hands-on experience, to give you a qualification that will help you get started in a particular industry. There are literally hundreds of different options for you to study in a variety of industries, ranging from art and design diplomas to equine management certificates.  They are called ‘National Diploma’ – so you must include the two words for it to mean professional qualifications.  They are also issued by many colleges and organisations – mostly City & Guilds – e.g.  A City & Guilds National Diploma in ………

The Institute of Leadership (ILM) is the professional arm of City & Guilds, offering leadership & management qualifications at different levels.

Lantra is another awarding body and Training Organization for the Land Based Industries which includes equine management.

What is the EQF?

EQF stands for European Qualifications Framework and is an EU-wide system designed to help comparison between the qualifications offered in different EU countries.

The government offers various forms of funding to those completing accredited vocational qualifications. However, you need to meet certain conditions in order for this to be available to you, depending on the type of funding you are requesting. The option which might apply to adults looking at these courses would be.

Professional and Career Development Loans (PCDL) – commercial bank loans between £300 and £10,000 that need to be paid back (at a reduced interest rate). The government pays interest while you’re studying.  Visit the National Careers Service website for more information on public funding and eligibility criteria.

Not to be confused with EQL  This is Equestrian Qualifications Limited, a subsidiary company of the BHS and the awarding body for all their own qualfications which are no longer included in BEF UKCC awards.

Ofqual is the body responsible for regulating all qualifications, examinations and assessments in England, alongside vocational qualifications in both England and Northern Ireland.

What is Work Based Learning

there are two main types of qualifications: knowledge-based and competence/work-based.

The main difference lies in the assessment methods used, with the former (knowledge based) requiring learners to produce a number of written assignments, which are then submitted and marked, and the latter requiring at least some degree of assessment in a real work environment.

Following a recent review commissioned by Sport England, we know the UKCC will remain unchanged for the next 2 years but could change beyond September 2020.

We understand coaches who have been through the ‘UKCC’ coaching pathway with BEF and our member bodies may be concerned at these future changes to the UK Coaching Certificate and that their qualifications may not be valid any longer.

The Coaching Development Action Team (CDAT)* would like to reassure coaches holding UKCC endorsed qualifications that irrespective of the future of UKCC endorsement, these equestrian qualifications will remain an integral part of our coaching pathway as they have been designed and belong to the Federation and its member bodies.  We are therefore all fully committed to these qualifications into the future.  We are already working with CIMSPA (Chartered Institute for the Management of Sports and Physical Activity) to input into the design of any future endorsement and understanding their developing Professional Standards.

In summary, our coach education pathway and the levels (Level 1-4) we have in place will remain and continue to be vital to equestrian sport. Any qualifications coaches have achieved endorsed by UKCC will remain valid and recognised throughout the industry in the UK and internationally for discipline competition coaches through the International Group for Equestrian Qualifications (IGEQ) passport.

*CDAT is a group comprised of BEF member bodies who deliver coaching training, education and qualifications.

I’m based in Dubai and soon joined Lingfield Equine Distance Learning courses. My 15hh Arabian mare is called Sugar, she’s ex endurance and far more ‘horse’ than I have ever ...

The Lingfield Equine First Aid Course is so informative. It is so detailed, I haven’t had to ask my tutor for help. The links to different help resources during the ...